Abstract : The Belt and Road Initiative (BRI) brings new opportunities to bilateral investment and trade between China and New Zealand, said Peter Goodfellow, president of Global Presidium of NEXT Federation in an interview with Xinhua. 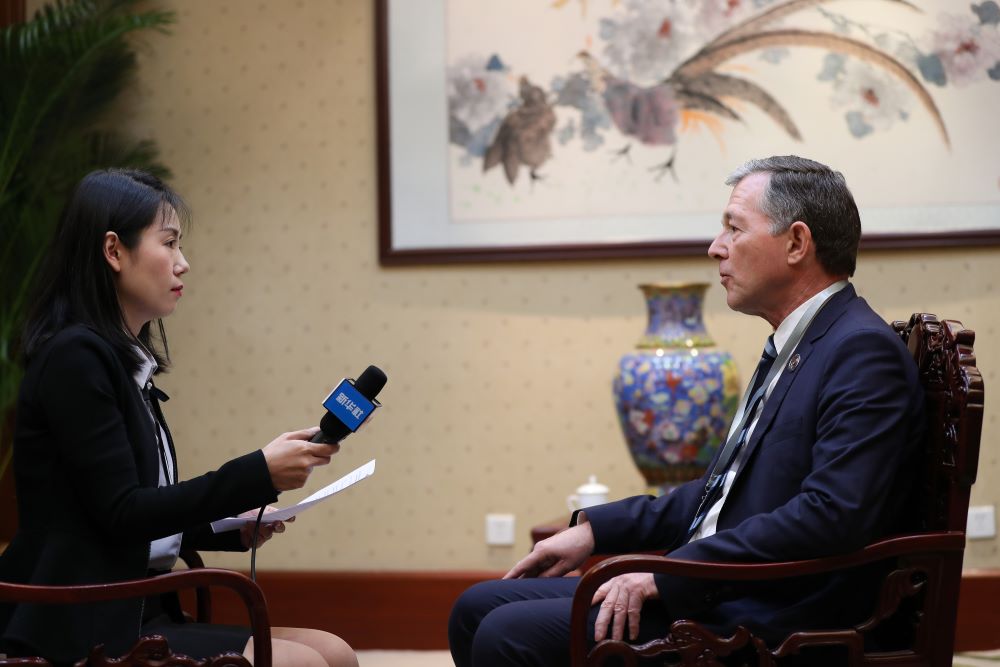 Photo: Peter Goodfellow, president of Global Presidium of NEXT Federation (right) in an interview with Xinhua during the inaugural meeting of the Belt and Road Economic Information Partnership (BREIP).

BEIJING, June 27 (Xinhua) — The Belt and Road Initiative (BRI) brings new opportunities to bilateral investment and trade between China and New Zealand, said Peter Goodfellow, president of Global Presidium of NEXT Federation in an interview with Xinhua.

When attending the inaugural meeting of the Belt and Road Economic Information Partnership (BREIP) on Thursday, Peter told Xinhua reporter that the prospects of cooperation between China and New Zealand will be continually strong .

The opportunities had been already realized since the free trade agreement signed between China and New Zealand, he added.

“New Zealand is a very open country. We have had low taxes for many products for not just years, but for decades. It is natural for us to support the BRI,” he said.

“It broadens the reach of New Zealand companies, and makes it easier for other countries to understand New Zealand,” he added.

Peter stressed that the BREIP offered a good platform for participants to share information and communicate with each other.

The BREIP co-founded by more than 30 institutions around the world announced its establishment in Beijing on June 27.

This is an important measure to implement the list of deliverables of the Second Belt and Road Forum for International Cooperation and of positive significance for deepening the exchanges and cooperation between Chinese and foreign media and research institutions in the field of economic information.

The BREIP is initiated by Xinhua News Agency and its founding members are well-known news agencies, information service providers, research institutions, chambers of commerce and associations from more than 20 countries and regions in Asia, Europe, Africa, Latin America and Oceania.

Member institutions can share information and research results concerning the Belt and Road-related investment, trade, industry, projects and enterprises via the BRInfo platform in real time, free of charge.

Peter said the BREIP offers a very good opportunity for the participants to utilize economic information. BRInfo platform is a rich information source for people who are looking for investment opportunities.

Peter said the NEXT Federation could contribute the New Zealand information as it is their initial expertise. The information not only comes from institutions, companies and organizations in New Zealand but also from other countries.

“We would like to encourage their partners to contribute economic information and to use the information in the system,” he added. (Contributed by Wu Congsi)